By DanielRadsgrl,
September 14, 2003 in Kings Island 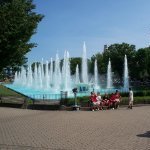 Just had a crazy dream.    I was at the park and there was associates in the Coney Mall area telling whoever would walk by them,  there was a special behind the scene's event today and it was happen

2 nights ago.   Some how found myself walking with Chugh43 down the path away from The Beast, towards Coney Mall. It was pitch black, and somehow I deciphered it to be around 3 am. I was in panic mod