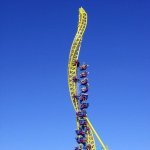 Thank you for posting that! The feels, man, the feels. I went to Kings Island for the first time in 1995, two years after the ride had opened. I didn't ride it, but most of the group I was with did.

That was an awesome day at work and ended up being the only day I left early. After spray painting all morning, my finger got really sore and I couldn't move it. I was allowed to leave work, made a do

Can't see much here, quick picture I took in line yesterday. Something is visible, not sure what.