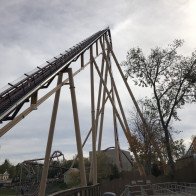 I don't see anything wrong with a small group using the single rider line, provided they understand and agree that they will not get to sit together, and very likely not all be on the same train. My g

I am not sure how this upsets anyone, and no one is cutting. Think of it this way. That group of 4 could have been in front of you in the regular queue.  That may have caused you to wait another

Did you join KIC just to complain about this?  Having empty seats actually slows down operation more than full seats. Due to the operators having to wrapping the seatbelts around the empty restra