Smoking outside of smoking areas 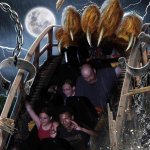