The Train Photo Opportunity and Q&A was done this way so attendees can come and go at their leisure, have an opportunity to capture better photos, have more of conversation with the engineers and

For the majority of the attendees, Coasterstock is not about ERT. It's a weekend celebration, a big "Family Reunion" for many. A chance to unite or reunite with other like-minded people. Oh, sure, the 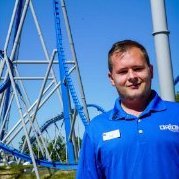 Got a glimpse at the Coasterstock 2021 itinerary, and it is STACKED! Stay tuned for it. Anyone here going to be taking part in this exciting event?