That is my son. I was slowing him down on our way to the next ride. 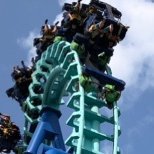 Here’s an image of the area where Adventure Express’ entrance/exit used to be.