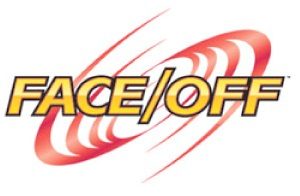 Inversions: 6  All are 72’ high.  (Only three inversions but the train travels through each element twice.  Two of the inversions are a dual cobra roll.

Structural Engineer: Steven Schaefer Associates, Inc. was responsible for the structural design of the ride foundations.

Miscellaneous: There are four people per car, two facing forward and two facing backwards.  Riders are actually facing other riders.  Once the train completes one circuit, it repeats the circuit in the opposite direction.  Face Off was renamed Invertigo for the 2008 season.  The ride was repainted from its yellow track and red supports to aqua blue track and navy blue supports for the 2012 season.